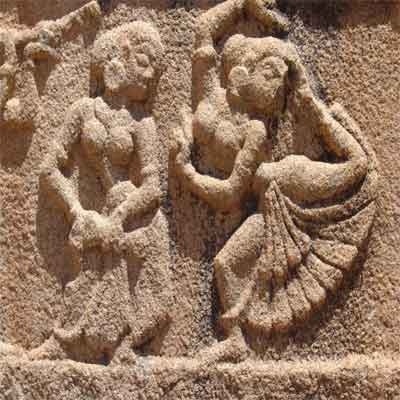 Hampi, the famous UNESCO World Heritage site on the banks of river Tungabhadra in Karnataka, was once the great medieval metropolis called Vijaya­nagara (City of Victory). This city, founded by Harihara I and Bukka I in 1336 AD, was the capital of the monarchs of the Vijayanagara dynasty till 1565 AD. It has been praised by many foreign travelers including Abdur Razzak, an envoy from the court of the ruler of Persia who visited Vijayanagara in 1443 AD.

In this site full of ruined structures, one of the most eye-catching monuments is the Mahanavami Dibba, a huge stone platform in three tiers, about twelve metres high, with its massive base measuring 35 square metres. It was meant for the Vijayanagara monarchs to watch the ceremonial parades during festivities, especially the famous Mahanavami festival during which the pomp and wealth of the empire was displayed.

Needless to say, the city of Vijayanagara was home to the fine arts. On the walls of the Mahanavami Dibba are intricately carved sculptures depicting many scenes, possibly of everyday life and of the Mahanavami festival. Many of these carvings are of dancers and musicians, depicted in minute detail, including their dress and ornaments.

Mentioning that the Mahanavami festival lasted for nine days, Domingo Paes, a Portuguese visitor to Vijayanagara during the reign of Krishnadeva Raya (1509-1529 AD), states that there were many feasts during this festival to which were “summoned all the dancing-women of the kingdom, in order that they should be present”. He also mentions that the women who could play instruments and sing were among the royal employees and that even the wives of the King were educated in music. According to Duarte Barbosa from Portugal, who visited this city in 1501 AD, the “women were taught from childhood to sing, play and dance and to turn about and take many light steps.”

Sculptures depicting dancers and musicians holding various musical instruments are found not only on the Mahanavami Dibba, but also on the walls of temples and other ruined structures in Hampi – a mute reminder of the glorious patronage of the fine arts by the royalty of Vijayanagara.

(The author is a historian focusing on temple art and architecture)