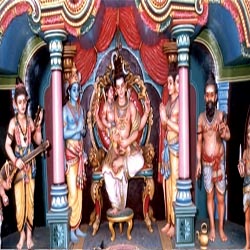 The fourth of the six principal shrines (Aru Padai Veedu) of Lord Subramania in Tamil Nadu is at Swamimalai or Tiruveragam, located three miles from Kumbakonam. Legend has it that Subramania once asked Brahma the meaning of Om, the pranava. As Brahma was unable to give a satisfactory reply, Subramania had him clapped in chains and assumed the role of the creator himself. On coming to know of this, Siva asked his son if he knew the meaning. Subramania offered to explain it to Siva if he would accept him, Subramania, as his guru. Siva acquiesced and placing his son on his shoulder, had the supreme truth whispered into his ear. Subramania became preceptor to his own father and was therefore referred to as ‘Swami Natha’. The temple in this sthalam commemorates this celestial event.

The Swamimalai temple is on a man-made hillock. A small shrine, it can be covered in an hour. Three sacred tanks — the Vajra, Saravana and Netra pushkarini-s — surround the temple. Another water body, the Kaveri, flowing a short distance away, is also associated with the temple. We approach the temple from the south where there is a five-tiered rajagopuram of modern origin. There are also gopuram-s on the east and west, usually locked. There are three circumambulatory corridors in the shrine, the first at the ground level, the second at an intermediary level and the third around the sanctum at the top of the hillock. As it is customary to first worship at the sanctum in this shrine, we proceed upwards. We climb sixty steps to reach the sanctum. Each step is said to represent a year in the Hindu cycle. At the flagstaff, there is a shrine to Ganapati, facing south, going by the name of Netra Ganapati  he is said to have blessed a blind man with vision when he was bathing in the Netra Pushkarini before worship. Even now, devotees with defective vision offer special prayers here.

The sanctum to Subramania faces east. The main idol is over six feet tall and rather like the Lord in Palani, has two arms, with the right holding a staff and the left resting on his thigh. A variety of alankara-s is done throughout the day  he sometimes looks like a mendicant and at others like a king. Flanking the main shrine are two others  in each, the Lord is enshrined with one of his two consorts. In one, he is with Devasena and referred to as Sabhapati. In the other shrine, he is a hunter, with Valli. He is called Senapati. The Sabhapati and Senapati icons are both made of panchaloka as is the main processional deity with both consorts.

There are sub-shrines to Veerabahu, Mahalakshmi, Saraswati, Idumban, Dandayudapani, Soorya and Chandra. You do not see the customary peacock facing the Lord in this shrine. An elephant takes its place instead, because it is said Indra after offering worshipping Subramania here, left his mount Airavatam for the Lord’s use. The palliyarai or bedchamber of the Lord has an exquisite icon of a seated Valli.

Coming down the steps, we can pause at the second prakaram in the middle level to enjoy the breeze, a view of the village and the distant spectacle of the Kaveri. Coming to the ground level, we can offer worship at the shrines to Meenakshi and Sundareswara, both of whom were installed here by Varaguna Pandya. It is said that in keeping with Subramania’s status as guru, Siva as his disciple, is to be worshipped last, which is why he is at a level lower than his son. The sthala vriksha or sacred tree here is the Nelli. It is considered to be a representation of Bhoodevi or Goddess Earth.

The temple is a busy one with worship offered six times a day. The asterism of Kritika or Kartikai is celebrated each month when devotees throng to the temple. The Skanda Shashti festival is celebrated on a grand scale. The annual festival or Brahmotsavam falls in April. The Vaikasi Visakham in May is a big draw as is Thai Poosam in January. Panguni Uttiram in March and Kartikai in November are also important festivals at this shrine. The deity has a golden chariot (ratha) which is paid for as a propitiatory rite by several devotees and is taken out in procession on many days. This takes place in the circumambulatory passage in the ground level.

The temple, originally built during the reign of Parantaka Chola I, suffered extensive damage during the Anglo Carnatic Wars of the 18th century. It has since been renovated with much of the work taking place in the 19th and early 20th centuries.

That it is an ancient shrine is evident from the paeans to it in the Tirumurugatruppadai of the Sangam period. Arunagirinatha (14th century) lavishes praise on this shrine in about 30 verses of his Tiruppugazh. In one verse (Taruvaarivar) he describes the beauty of the river Kaveri at this shrine. It surges noisily along, he says, the roar of its waves making the spectator wonder if it is the ocean itself. He also states that cranes, storks and swans frolic in the waters and search for prey. In another verse Iruvinil punaindu, Arunagirinatha praises the Lord here for having chosen his place on the northern bank of the Kaveri, famed for its conch shells. In the same verse, he also pleads with the Lord to open his (the devotee’s) third eye, the eye of wisdom. This could be an indirect reference to Netra Ganapati who is also said to grant knowledge. In his verses, Arunagirinatha uses various names for this shrine including Samimalai, Tiruveragam and Gurumalai. It is a common belief even now that the Sabhapati idol depicts Subramania in a dancing posture as the arms are spread out. That this belief existed even in Arunagirinatha’s time is evident from the verse Endath thigaiyium where he says Subramania dances delightfully even as Devayanai, she of the slim waist, is seated in front of him.

Writing on Swamimalai in Kalki in the 1960s, Bhaskara Thondaiman states that Arunagirinatha was specially attached to Swamimalai as he vanquished a challenger — Sambathandan, here in a debate, though the same legend is also attributed to Tiruvannamalai.

After Arunagirinatha, we come to Muthuswami Dikshitar (1765-1835), that peregrinating devotee of Subramania, who composed songs here. Two of these are mentioned by Subbarama Dikshitar in his Sangeeta Sampradaya Pradarsini  Sree Balasubramania in Bilahari, and Swaminatha in Chalanata. The first has references to the kshetra (the Lord is referred to as ‘Swamisaila sthita’), the icons (as ‘Kanakavalli Devasenopeta’), the legend of his having taken on the task of creation (‘Aabalagopa vidita’) and that he is the Truth (atmaprakasa). The second song also refers to the Lord creating the five elements (Bhoomi jalagnivayugaganakirana bodha roopa). Two more songs of Dikshitar, Swaminathena in Brindavani and Sree Swaminathaya in Khamas have surfaced later.

Pamban Swamigal (1848-1929), a great devotee of Muruga who among other works, composed 6666 songs on his favourite deity, has created verses on Swamimalai. The 19th century poet Swami Kavirayar has composed a full work Swaminatham on this temple. Papanasam Sivan (1890-1973) has composed several songs on Subramania of which two songs, among others composed in Swamimalai are well known — Tamasam en in Todi and Neeye saran Shanmukha in Kambhoji. There are besides several songs of his where Swamimalai is mentioned in addition to others shrines of Subramania. Swamimalai is also the subject of a verse in several ragamalika-s based on

Thanks largely to the efforts of Pudukottai Dakshinamoorthy Pillai and his close friend Alathur Venkatesa Iyer, many Tiruppugazh verses were set to music and brought to the concert platform. The Alathur Brothers, Sivasubramania Iyer and Srinivasa Iyer, were known for their Tiruppugazh concerts in which all the songs were from this compilation and some of the verses of Swamimalai were made famous by them. Dakshinamoorthy Pillai also conducted Aru Padai Veedu Utsavam regularly and naturally Swamimalai was one of the chosen venues. Many musicians graced the occasion and performed here. Several of the Tiruppugazh verses also became well-known thanks to Kanchipuram Naina Pillai and M.M. Dandapani Desigar. If Sree Balasubramania of Dikshitar was made famous by Semmangudi Srinivasa Iyer in his concerts, Swaminatha and Papanasam Sivan’s Tamasam en became the rage because of GNB. The shrine was a personal favourite of Kumbakonam Rajamanickam Pillai who would frequently set out with all his disciples to Swamimalai. There he would have archanai performed for all of them and pray for their well being

according to an interview given by his disciple Lalitha Venkataraman. Who can forget Madurai Mani Iyer’s immortal pallavi in Shanmukhapriya that went “Saravanabhava Guruguha Shanmukha, Swaminathane”? In recent years, Sanjay Subrahmanyan has made Neeye saran Shanmukha famous. A song of Pamban Swamigal on Swamimalai, Nanjamunda set in Bhairavi has been rendered by Gayatri Girish recently in a commercial recording.

B.M. Sundaram in his book Marabu Tanda Manikkangal (Dr. V. Raghavan Centre for Performing Arts) writes of a dancer, Swamimalai Nagarathnam (1868-1931) who learnt music from Umayalpuram Sundara Bhagavatar, a direct disciple of Tyagaraja. Maharaja Krishna Rajendra Wodeyar IV of Mysore greatly honoured her. Her grandson was the well-known singer Madurai Somu. Swamimalai S.K. Rajarathnam, who hailed from this town, was an acclaimed Bharatanatyam natyacharya and a fine vocalist. The popular pada varnam Nathanai azhaittu va sakhiye in Kambhoji, is on Swaminathaswami.

There is one song Siva guruparane attributed to the nagaswara maestro T.N. Rajaratnam Pillai. Is it on Swamimalai? If yes, then this shrine has the unique distinction of being the recipient of TNR’s only composition.