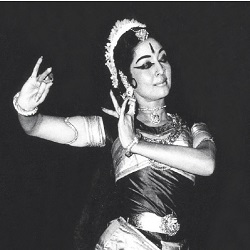 One of the most renowned Indian classical dancers of the 20th century was the vivacious and hugely talented Yamini Krishnamurthy, born on Dec 20th 1940 at Madanapalle, Andhra Pradesh. Proficient in both Kuchipudi and Bharatanatyam, Yamini is still involved in her art, capable of mesmerising audiences with her art even today, in her seventies.

Named `Yamini Poornatilaka`, or "a beautiful mark on the brow of light", by her grandfather, a noted Urdu poet, Yamini began her training in Bharatanatyam, as a child at Kalakshetra, Chennai. After mastering the basics, she went on to study with such renowned dance gurus as Kanchipuram Ellappa Pillai, Taanjavur Kittappa Pillai, Dandayudapani Pillai and Mylapore Gowri Amma.

After her debut in 1957 at Chennai, Krishnamurthy quickly became a rising star in India’s dance scene. Her training in Kuchipudi was eminent gurus Vedantam Lakshmi Narayana Shastri, Chinta Krishnamurthi and PasumarthyVenugopal Krishna Sharma. She later learned Odissi from Pankaj Charan Das and Kelucharan Mohapatra. She learnt Carnatic music too, vocal from M. D Ramanathan and the veena from Kalpakam Swaminathan.