Palghat Rama Bhagavatar was born on 5th June 1888, at Munda Mukha near Shoranur, to village revenue official Kasturi Ranga Iyer and Alamelu Mangai, as their fifth and last son. Kasturi Ranga Iyer had a modest income which helped meet the barest needs of the family. They had a small, unpretentious home with a well in the backyard. The village was on the banks of the Bharata Puzha river. The presiding deity of the village was Lord Ayyappan. Rama Bhagavatar attended the village school and learnt the Vedas and sastra-s. His elder brother Venkatakrishna Bhagavatar, who had a flair for classical music, became an exponent of Kathakali padams. He taught young Raman to sing along with him. Rama Bhagavatar was then eight years of age. This laid a firm foundation in young Raman, who in addition to the padams, also absorbed the nuances of Carnatic music. Raman and Venkatakrishnan began to learn Carnatic music from Vadakancheri Rama Bhagavatar and his brother Subbarama Bhagavatar. Since Kathakali performances were held for hours at a stretch at night, they began to tell on the health of young Raman. So his brother advised him to quit singing Kathakali padams and focus instead on Carnatic music, then being popularised by the Kumbakonam and Tanjavur schools.

Rama Bhagavatar’s quest for a career in classical music took him to nearby Thondikulam, where he was introduced to the stern Anantarama Bhagavatar. It was perhaps providential that he left his Palghat Rama Bhagavatar village, for flood waters of the Bharata Puzha soon devastated it. Anantarama Bhagavatar’s wife was a compassionate woman who took Raman in her fold and shrewdly covered up his lack of knowledge of cooking, then considered a key qualification for a sishya. Nevertheless, Rama Bhagavatar attended to jobs small and big in the house. He waited on Anantarama Bhagavatar, attending to his every need. To learn music, no sacrifice was too great. He had a keen ear and listened attentively to every song Anantarama Bhagavatar sang. He used the time his guru rested to try and sing those songs. His diligent practice soon made the Bhagavatar realise his prodigious potential. The boy began to accompany the guru in all his Harikatha discourses as his vocal accompanist. He had a rich and sonorous voice that could hold the audience in thrall. 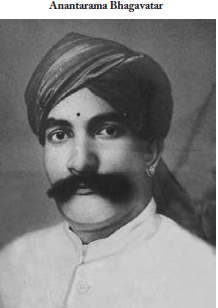 Anantarama Bhagavatar was a regular visitor to Kumbakonam, then the centre of classical music. He took Rama Bhagavatar along with him to listen to the music of Maha Vaidyanatha Sivan. (It is said he posed as a tantric to gain admission into Sivan’s home). He also started taking Rama Bhagavatar along with him to Tanjavur and other places nearby to listen to the great musicians there. One of the musicians whose performances Anantarama Bhagavatar frequently attended was the late Umayalpuram Swaminatha Iyer who accepted Rama Bhagavatar as his live-in disciple after putting him through a rigorous test. Maharajapuram Viswanatha Iyer was a fellow sishya and the two became close friends. Rama Bhagavatar’s tutelage under Swaminatha Iyer was an opportunity to learn a number of kriti-s of Tyagaraja from a scion of the great composer’s musical lineage. Rama Bhagavatar spent the next eight years in Kumbakonam, learning the nuances of various ragas, in the process evolving his own style of manodharma.

Maha Vaidyanatha Sivan’s brother Ramaswamy Sivan encouraged the budding musician in Rama Bhagavatar to participate in the annual Tyagaraja aradhana at Tiruvaiyaru without fail. Rama Bhagavatar also learnt a large number of kritis of other great vaggeyakaras like Muthuswami Dikshitar, Syama Sastry, Gopalakrishna Bharati, Swati Tirunal, Patnam Subramania Iyer, Jayachamaraja Wodeyar, and Mysore Vasudevachar. In addition to kritis in Telugu, Kannada, Tamil and Malayalam, he also learnt a few abhangs in Marathi, thanks to his association with violin maestro Mysore T. Chowdiah, who temporarily moved from Mysore to Old Kalpathy at the bidding of Rama Bhagavatar and accompanied him on the violin in many performances. In time, Rama Bhagavatar returned to Thondikulam and became a part of his guru Anantarama Bhagavatar’s troupe. Unfortunately, Anantarama Bhagavatar passed away when he was just 49.

Rama Bhagavatar’s music attracted rasika-s in large numbers. His rendering of ragam-tanam-pallavi was regarded as masterly. At a period when music concerts lasted up to five hours, Bhagavatar was never found wanting in stamina to execute such marathon performances – without the aid of microphone and loudspeaker. He preferred ghana ragas like Bhairavi, Kalyani, Todi, Saveri, Dhanyasi, Sankarabharanam, and Kharaharapriya. His elaborate alapanas brought out the nuances and subtleties of the ragas in full measure. Old timers nostalgically recall his rendering of kritis like Rama nee samanamevaru (Kharaharapriya), Akshayalinga vibho (Sankarabharanam), O Rangasayee (Kambhoji), Paramapavana Rama (Poorvikalyani), Hari nenendu vetukudura (Karnataka Behag), and Bhajare re chita (Kalyani). His rendering of Gopalakrishna Bharati’s Varugalamo ayya in Manji was so poignant that listeners were often moved to tears. The late Maharaja of Mysore Jayachamaraja Wodeyar regularly invited Rama Bhagavatar to his durbar during Dasara for a special performance and honoured him. So did the late Maharaja and Maharani of Travancore. Nobel Laureate C.V. Raman bestowed on him the title of Gayaka Kesari. He also received honours from the Mahasannidhanam of the Sringeri Sarada Peetham and the Paramacharya of the Kanchi Kamakoti Peetham.

The Music Academy and Sri Krishna Gana Sabha, Chennai, display his portrait in their premises. Presiding over a function to unveil his portrait at Sri Krishna Gana Sabha, Semmangudi Srinivasa Iyer paid glowing tributes to Bhagavatar. An endowment has been instituted in the Music Academy, Chennai, by the Bhagavatar’s son M.R. Venkataramanan and his family for an award to the best performer in raga alapana during the annual December season. Rama Bhagavatar was 23 when he married Rukmini. She was then only nine. Rama Bhagavatar settled down in Old Kalpathy, Palghat, in 1910 and remained a resident of that village till his last days in 1957. His house is still going strong – the home of his children, grandchildren and even great grandchildren. Till his last breath, Rama Bhagavatar performed the annual guru pooja in memory of his guru. Rama Bhagavatar and Rukmini had seven sons and four daughters. His second son M.R. Seshamani who for sometime accompanied Rama Bhagavatar in his concerts, later become a disciple of G.N. Balasubramaniam. His fourth son, Lakshmi Narayanan, accompanied Rama Bhagavatar for the rest of his musical career.

Rama Bhagavatar’s residence was always open to those who wanted to learn kritis from him, for which he charged no fees. Among his important disciples were K.V. Narayanaswamy, Puducode Krishnamurthy, and K.S. Sankaran Nambudiri. Rama Bhagavatar’s last performance was in June 1957, in the precincts of the Kasi Viswanatha temple at Kalpathy, during its kumbhaabhishekam. He was accompanied by Kandadevi Alagiriswamy (violin) and Palghat T.S. Mani Iyer (mridanga). He had made his debut at this venue years ago. He was now 69 years of age and his performance lasted four hours. The piece-de-resistance of the performance was Muthuswami Dikshitar’s Akshyalinga vibho. He ended the performance with Varugalamo ayya and Satre vilagi irum pillai, requesting Nandikeswara to make way for his direct darsan of Siva. Those who heard him sing that day remember his moving rendition with nostalgia. It was his swansong. A fortnight later, he passed away on 26 May 1957 while performing sandhya vandanam at the Nila river in the morning. Rama Bhagavatar was a great devotee of Lord Rama. He lived a life devoid of ego, anger and avarice. He shunned publicity, and music was the medium through which he sought to establish communion with Lord Rama. His Rama nee samanam evaru in Kharaharapriya still remains unsurpassed. He was a true nadopasaka.

(The author, a son-in-law of Rama Bhagavatar, thanks M.R. Sesha Mani, M.R. Ramanan, R. Lakshmi Narayanan, and R. Kanakam, for providing him material on their father)

A Legend in the Family

As the initial few phrases of Kedaragaula wafted through the air, the entire house instantaneously fell silent. The deep voice continued to build the raga, reaching its depths, bringing out the crux, the soul of the raga as it was presented in all its glory. The music was positive, it was happy. It was masculine yet sensitive. A satisfied rest at the shadja brought the magnificent alapana to a close, when a thunderous applause in the recording brought us back to the present. Palakkad Rama Bhagavatar then began singing Muthuswami Dikshitar’s Neelakantham bhajeham at a brisk, invigorating pace. I am truly blessed (and overwhelmed to say) that I belong to the Palakkad Rama Bhagavatar family – a fifth generation descendant. Rama Bhagavatar, known within the family as ‘Mundaya’ Rama Bhagavatar was a star musician in the first half of the twentieth century.

My grandfather recalls the boys of both houses playing football together, barefoot, on the sprawling fields that belonged to the family (and keeping in mind the large size of families around the 1930s, there were more boys than two football teams could fill), and then unwinding at ‘Mullakadu Madom’, where they would drink water and eat snacks, and quietly sneak up upon Rama Bhagavatar practising, in serious conversation with a fellow musician or organiser, or in deep discussion on music with his brother.

The villagers respected and admired Rama Bhagavatar. He was a musician of national acclaim, and the inhabitants of Mundaya were proud of their son. Rama Bhagavatar moved to Palakkad after a while, where, incidentally, he also made his debut. An organiser par excellence, he conducted a Tyagaraja Utsavam at Kalpathy (in Palakkad) for many years. His music Palakkad Rama Bhagavatar had a lovely, deep voice, a penchant for traditional ragas, that he rendered in his gamakaladen style. It was, essentially, madhyama kala singing, some­thing which he applied to his alapana expositions as well. Today, we tend to equate a gamakaoriented style with a ‘slow’ pace of singing, a myth that is dispelled while listening to Rama Bhagavatar’s music. He seamlessly integrated it into an inherently madhyama kala pace of rendition. What is most popular about his music includes his grand Kharaharapriya and his emotive rendition of Tamil compositions such as Varugalamo, and javali-s.

The legacy of musical talent was carried forward by his son-inlaw, violinist C.R. Mani Iyer, prime disciple of Mysore T. Chowdiah. Mani Iyer was also my father’s guru. My father and grandparents recall how he used to stay at their house after they moved to Shoranur, during his concerts in the district, and teach for four or five hours. His classes were intense, and my father tells me that he was punctilious and uncompromising about bowing technique. While my father did not take up the violin professionally, I can still hear the sensitivity in playing he imbibed from his guru. C.R. Mani Iyer and Rama Bhagavatar had a good relationship, and often had long discussions on music. He was adept at Harikatha and singing for Kathakali. He revered his gurus Palakkad Anantarama Bhagavatar and Umayalapuram Swaminatha Iyer. Palakkad Rama Bhagavatar was a peaceful man who lived a simple and honest life. He was a spiritual and contented man. Pecuniary gains did not move him. His music was deep; it was emotive yet exhilarating; it was energetic yet reposeful; it was positive but introspective. He was truly a great musician.

(The author is a young performing musician from Bengaluru)