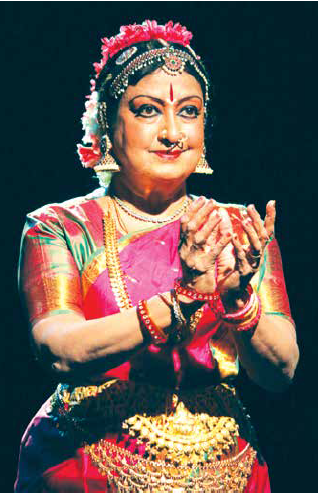 Padma Subrahmanyam is a complete artist with a holistic vision—a rare combination of a dancer, choreographer, scholar, teacher, singer, music composer, author and Indologist. Passionate about art, culture and the nation, she is a trailblazer – a pathbreaker treading new ground, as well as a pathfinder; she is an innovator and a revivalist. An ace communicator, she is an icon and inspiration for the younger generation. Padma the little lotus bloomed on 4 February 1943 in Chennai in a household steeped in art and culture. The story goes that the bonny baby was named “Padmavati” by her grandmother Visalakshiammal who was then reading the story of Jayadeva and Padmavati; she prophesied that the child would go on to become famous in both music and dance. Padma’s father ‘Director’ K. Subrahmanyam was a freedom fighter, a pioneer in Indian cinema, and a paternal figure in the field of culture. Her mother Meenakshi was a lyricist in Sanskrit and Tamil who composed music and played the veena, violin and harmonium. She even accompanied her daughter in several concerts. When she was five, Padma was introduced by her father as a child artist in his film Gita Gandhi, in which she even sang a song written by her father and set to tune by her mother. The song uncannily reflected Padma’s future.