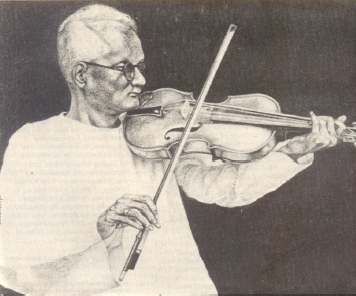 He was very young, hardly more than a boy, and he had just concluded giving a violin recital marked by a sense of serenity and adherence to tradition. He had captured the imagination of the audience which had not only stayed till the end but was now loathe to leave the hall in a hurry. While the connoisseurs exchanged views among themselves, many thronged the platform to take a closer look at the performer and to voice their admiration. The boy's older brother now came to him and said it was time to go home. He beseeched the rasikas to let the young violinist go, since it was already late. Reluctantly they made way for the brothers. The boy couldn't see very well — he was extremely near-sighted though not actually blind — and the elder brother picked up the violin in its case with one hand and with the other led the kid towards the exit.