M.S.Subbulakshmi Crossing Yet Another Milestone 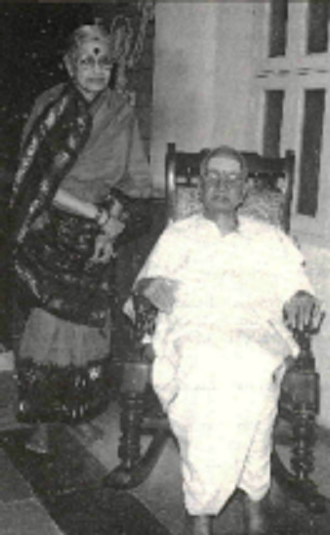 Madurai Subramania Iyer Subbutakshmi, just MS to millions, enters the ninth decade of her life on 16 September. Coincidentaiiy, her husband T. Sadasivam enters his 95th year, according to the Hindu calendar, on the same day. Ganesa Chaturtfti also falls on 16 September and we join others in wishing the Remover of Obstacles would clear the path ahead for the couple so they may each score a century. MS has aged graciously. She is frail but her face reflects an inner glow. She suffers from aches and pains; yet when she sings, she casts a spell as certainly as she ever did. Her music is still magic even to those who succumbed to it in her heydays.

Thousands upon thousands of her fans will vouch that her initials really stand for Melody Sublime. And even the most chauvinistic among the males populating Carnatica cannot honestly deny that she and her sisters of song D.K. Pattammal and M.L. Vasanthakumari have together established that women can be as good as the men, if not better than them, in making music which is of the highest Quality as well as popular. The trio has justly been that described as the Female Trinity of Carnatic Music.

She is a cult figure, adored by millions. Yet she comes through as a simple and gentle person, which she truly is. All the laurels she has won rest lightly on her head.

Organisations all over the country continue to seek her participation in various events. They want her to sing, if she could; or at least to light a lamp. They are willing to pay her fabulous fees fabulous for a Carnatic musician. And they continue to 6estow awards on her. The Chembai Centenary Award, the latest to be conferred on her, has justly earned her the apt title of Sangeeta Saarva Bhouma [Saarvabhoumi means Empress].

A fraction of such attention swells the heads of many ayoung musician today. But MS takes it all in stride. And virtuaffy all the money she has earned has quickly been passed on to serve causes dear to her and her husband.

On her 81st birthday, as greetings pour in, the grand old lady can justfy be proud that she has earned not only lasting fame but also the affection and goodwill of thousands upon thousands of people.

Tet she comes through as a simple and gentle person, which she truly is. All the laurels she has won rest lightly on her head.

Young musicians, regardless of gender, can profit from a study of the career and personality of this lady of great accomplishments. If only they would try.