Finchcocks: A Museum of Musical Instruments 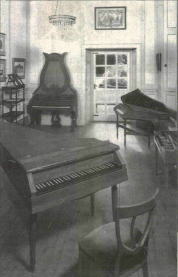 The Finchcocks a collection of historical Keyboard instruments is housed in an old manor house set in extensive grounds a few miles outside Goudhurst in Kent's High Weald country in England. The tranquility of the setting, the high ceilings of the house and the wood panelled walls offer near perfect acoustics. The instruments themselves, most of them dating back to the 18th and 19th centuries, are maintained in good playing order, and played for visitors as they are led through the collection. Also provided is a short history of some of the instruments, whetting the appetite for more detail. Visitors also learn that the house was originally acquired to house the collection Richard Burnett, founder of Finchcocks, and to serve as a base for his venture in restoring keyboard instruments for museums as well as other collectors. Instrument builder Derek Adlam was also associated in this. Though the firm itself, Adlam Burnett, Historical Keyboard Instruments, was disbanded after 1980, Finchcocks remains in touch with many of the craftsmen.

The bulk of the collection consists of early pianos but chamber organs, harpsichords, virginals, spinets, and clavichords are also included. The uniqueness of the collection is that it aims to recreate, as accurately as possible, the music of classical composers on the same kind of instruments they used. Several instruments replicated those that Beethoven and Mozart played. One instrument, visitors are told, is similar to what Chopin played at his last concert in London. Even a casual walk through the collection suffices to make the visitors aware of the many variations in the early pianos. Production was by no means standardised. Two pianos dated to the late 1700's are operated by knee levers or pedals. In the 1800's, four or five pedals had become common, with one instrument producing the sound of several. A delicate Viennese forte piano incorporates a Turkish musical system consisting of bells, cymbal strokes and a drum-like device that strikes a sounding board.

Many of the instruments are striking for their appearance alone. The vertical grand piano, the Berlin Iyer piano, the pyramid piano from Prague with a clock on its front, a manual harpsichord made in 1756 in London to mention only the most striking  convince the viewer that they also served to enhance the general decor. Each piece is a work of art with generous use of marquetry, painted panels, etc.

As the instruments are played yes, they are played differences in sound quality become apparent, the English being heavier and more resonant than the Continental ones. The visitor also sees that, while the instruments in museums like the Victoria and Albert in London have an air of neglect and need restoration, those at Finchcocks have been lovingly rejuvenated and are in full glory as it were.

Over and above all this is Finchcock season stretching from April to October every year with Open days, private group visits, a September concerts agenda, and an educational programme for children. During the season, there are informal recitals and demonstrations spearheaded by Richard Burnett himself. His talks, laced with homour, are meaningful even to lay listeners. The in-house String Quartet provides concerts of good standard. Katrina Burnett recalls that the creation has also featured Indian dance [by London based dancers] who "played out amazing rhythms with their feet."

Craft and Garden Fairs are also held at Finchcocks. These occasions offer the non-cognoscenti a chance to learn about the instrument collection.