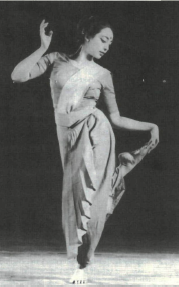 what is the impulse of movement? Is the impulse coming from the outside, from a teacher or choreographer who says, "Try this", or "Do this", in search of a particular line, shape or dynamic which may be something that is inherited, as in the case of classical forms, or something that is partly or fully conceived, as in the case of modern forms? What is the line, shape  and dynamic of impulses that come from within? What is an impulse that comes from within?

Any movement, in life, is created first in the mind. The time of creation may be short or long, depending on the situation; for example, a reflex action occurs when a movement is created in a split-second of time as a result of microseconds of brainwork, while the action of making food is the result of a long series of learning processes and application of those processes in the moment. The mind creates movement on a number of different levels. An instinctive movement may be the result of an emotional response, like jumping back from fire, while a complex series of motivations may lead to a movement to express some more complex response, like reaching out to help someone who is hurt. But the fact is that no movement exists in life devoid of motivation or intention from the mover.

Abhinaya is the fine art of reconstructing motivation and transferring it to stylised expression. There are three steps in the process of abhinaya: the object/subject, the response, and the expression. The starting point is an object (like a loved one, a memory, an inanimate object) which creates a response in the mind of the character and is then expressed. There are complex filters between object and response (the filters of the character's particular perception, coloured by his/her nature and experience), and response and expression (the filters  the character's intention and motivation), which create the multifaceted layers in any abhinaya performance of depth. The training for abhinaya requires that the artist be open to a vast range of feelings, whether he/she has actually felt them or not, so that this resource pool can be "on call", as it were, to explore a large variety of personalities and characters. Here, the role of imagination is paramount, and perhaps one of the reasons abhinaya is nearly always linked to text is because of the role of text in inspiring and developing the imagination.

The famous story of the Kathakali actor who could not express beebhatsa (revulsion) comes to mind. His guru was tired . of his failure with this particular rasa and the actor's constant protests that he just could not understand the feeling behind the rasa. The guru told the actor to fast, bathe, wear fresh white clothes, adorn himself with sandalwood paste and flowers, and go to the temple, where he would undergo a special ritual which would be uplifting and purifying. The actor agreed to do what he was told. At the gate of the temple, the guru perched himself on a high ledge with a bucket full of stale urine, and he emptied it on the actor all at once just as the latter stepped over the threshold. When the actor reacted with disgust and horror, the guru called out to him from his perch: "That is beebhatsa!"

This example is a highly direct comment on the method of abhinaya, and the comparative roles of imagination and experience. (A tale like this would probably spur students to develop their imaginative faculties as much as possible.)

There is often a mistaken idea that abhinaya has no role to play, or that it is best avoided, in a modern or contemporary work. This idea is understandable in the context of traditional abhinaya texts, which deal with the kinds of characters and situations which modernity questions. However, the methods of abhinaya can be deconstructed and decontextualised to yield a vast resource for the contemporary dancer, one which can enrich the process of working with deconstructed traditional forms.

The first area that needs to be addressed in deconstructing abhinaya is: where is the centre in the body from which such work can begin? My own experience with Kalakshetra-style Bharatanatyam, martia l arts, and abhinaya technique s has yielded the understanding tha t these forms work from the Manipura , the svadhisthana , and the anahat a chakra-s, respectively. Naturally, the main centre of each form does not preclude the use or the energising of other centres, but the sociohistorical nature of a form will, necessarily, centre it specifically in the body according to its purpose both in respect of the individual and of the environment. The anahata or 'heart' chakra being the centre of emotion, it is natural and also logical that abhinaya work begin here. Some students undergoing abhinaya training for the first time, after years of rigid and rigorous physical training, will experience an 'opening' of this chakra, felt as an overflowing of emotions that can emerge through a sense of confusion or a surfeit of tears. This is a natural process in removing blockages to the pure expression of the satvika state, and can be a healing process if it is understood for what it is. A detailed analysis of traditional 48 abhinaya techniques will yield a vast range of movements executed by the body, mostly extremely subtle, which are the physical effects of an emotion. The stance, posture, position of head, shoulders, arms, chest, and hips, are all taken into account when expressing a particular feeling. A body expressing grief, to take a simplistic example, will be held and move entirely differently from a body expressing joy. As most human emotion is complex and multi-layered, the intricate and fine movements of a body are called upon to express various states of internal conflict, paradox, confusion, or any other number of mixed states.

In working as a contemporary soloist, I have found it useful to apply these concepts as a method of creating vocabulary. The impulse of a movement is therefore always dictated by the inner, satvika state and propelled by the motivations provided by the particular emotional or mental states being explored. The small, subtle gestures of traditional abhinaya can be stretched into space to create movement that is more suited for the proscenium theatre and that takes on an abstraction beyond the emotion-impulse from which it originated. A body that is already trained will tend to take on lines and shapes in that space that have an inner logic; but in addition to this, it is possible to build up movement vocabulary through improvisation which will later go under the editor's scissors, in the context of an entire piece. (This is the process of wearing two different hats on one body: that of the dancer and that of the choreographer).

The philosophical grounding of abhinaya is also of paramount importance to the contemporary explorer, as it raises issues of the self. An emotion or feeling expressed is never an emotion or feeling actually felt in that moment. This distancing of self from art, a basic tenet of rasa theory, may be one of the most important aspects that differentiates Indian contemporary art from that of other cultures which do not stem from such a philosophy. Th e submersion of ego into the stream of rasa, as it were, may constitute the vital area that will distinguish a holistic contemporaneity from the fragmented confusion that often denote s postmodernism in the current international scene. This is not to deny the role of the self, the individual, and all its experiences, fragmented and otherwise, in contemporary dance. When one leaves behind given mythologies and personalities, the starting point may well be that very self. It is the method and the execution of which I speak when I discuss the distancing process of rasa.

A dancer/choreographer can have a number of choices, ranging from the very abstract to the very literal. However, I suspect, as time goes on, that these two exist not on a linear scale but on a circular one, meeting one another at some point. There are many so-called 'abstract' works of performance which seem to be literal codifications of concepts, while a highly 'literal' or 'narrative ' abhinaya text can take on highly symbolic abstract meaning s through imaginative interpretation. My ideas on the deconstruction of abhinaya are intended to expand the choices available through the Indian tradition, and to raise further questions and issues on how a variety of traditional techniques can be applied in the contemporary context.

Deconstructing abhinaya is an area of work that can take into account the complexity of our entire Indian tradition, extracting multifarious methods to yield a range of possibilities for the contemporary dancer. There is no reason to deny that the Indian tradition is rich in its theatricality; it is merely a matter of finding contemporary avenues with which to deal with that richness.