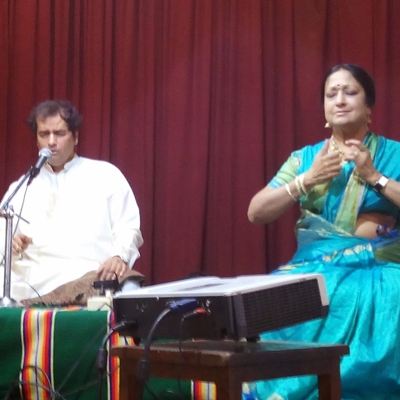 Sruti and the Karnatic Music Forum held a three-day lec-dem series during 12-14 December, 2014. This collaboration, now an annual event, is an attempt to demystify different aspects of music and dance by established and experienced exponents of the arts.
The theme this year was Sambho Mahadeva, and the sessions threw light, through Carnatic, Hindustani, and Devotional music, Natyam/Classical dance and Theatre, the pervading aspect of Siva in all these forms.

A verse from tevaram Thodudaiya seviyan rendered beautifully as invocation, by three ‘differently abled’ students of music trained by Carnatic vocalist, guru and medical practitioner Dr. S Sunder of Music Forum was a perfect start to what turned out to be a very enlightening series of lectures.

Dr Sunder welcomed the gathering and briefly listed the activities of the Forum. He spoke of the forum's association with other institutions to organise events, conduct workshops and record for posterity the knowledge of luminaries in the field. The unstinting support of patrons like R. Thyagarajan, Chairman of the Shriram Group, who was the chief guest for the day, helped sustain the activities and momentum of the Forum, he said.

The Chief Guest in his speech commended the dedicated efforts of Dr. Sunder and his team, especially the participation of his students JB Keerthana and JB Sruthi Sagar belonging to the next generation. He posed a question: Do lecdems play a useful role or is listening to concerts enough for a person to appreciate music? He said his understanding and appreciation of Western classical music were enhanced considerably by a course he attended, which made him believe that such lecdems would go a long way in promoting and deconstructing the art to lay persons. He praised Dr. Sundar’s contribution both to his profession as a doctor and to his service to the arts with the same level of commitment.

Sruti Editor-in-Chief V  Ramnarayan introduced the artist for the first session, Dhrupad exponent Uday Bhawalkar and his accompanist on the pakhawaj, Pratap Awad. Bhawalkar demonstrated Siva Aradhana in Dhrupad. In a way, his concert of the previous evening in memory of Dr. N. Pattabhiraman, Founder-Editor of Sruti, was a precursor to this lec dem. He had presented Raag Shankara and Raag Chandrakauns at the concert. Perfect technique, voice control, and total immersion in his music made the concert truly memorable. The alapana segment included the jhala – somewhat similar to the Carnatic tanam, with underlying rhythm. Pratap Awad provided excellent pakhawaj accompaniment. To a first time Dhrupad listener, the novel soundscape sans harmonium/sarangi accompaniment was a refreshing experience.

Uday Bhawalkar started off the lec-dem by saying that he liked to refer to ‘Hindustani’ music as ‘Uttar Bharatiya Sangeet’ since Carnatic music also belonged to Hindustan. The music that he has learnt and practises, he said, is based on bhakti and gyan.

He said Siva was his ishta devata. Even more than in temples, he felt one with his God just singing with his tanpura sruti. He could visualize Siva as a fakir, with matted locks, roaming freely in the Himalayas. Siva is considered to be the beginning, middle and end – creator, sustainer and destroyer. Every moment in Dhrupad is the same, he said, creating, working on it, then ending it, only to start anew. Like Siva, the great Yogi, there has to be a meditative quality, deep thought, peace and oneness of mind in music. Siva is a dancer – there is dance, rhythm in music.

Siva is free of the ashta paasa – ghrina, lajja, bhaya, sankha, jugupsa, kulam, jaatim and sheelam . So also when a person (Jeeva) is liberated from these faults, he becomes Sadasiva. Sadhana (practise, effort) and Siva are anant (endless).
Uday Bhawalkar said that musical values correspond to this Siva tattva, understanding and experiencing which enriches the beauty of music. In singing alap, every note produced, every syllable uttered is based on the sound of Aum. Music is certainly spiritual; the bhakti / devotion is to music itself, not necessarily to the words.

Uday Bhawalkar demonstrated Siva stuti in Raag Bhairav and Raag Bhatiyar, both morning ragas. He concluded with the Siva Panchakshara stotram of Adi Sankara that he had set to tune in Raag Sivaranjani.

To a question about using the voice during the question-answer session that followed,  Bhawalkar replied that each singer had his own voice range, and that it could be increased by some exercises. He said that the sound should predominantly emanate from the base, some sounds from the chest; certain sounds like ma and ni came from the sinus area of nose and forehead.

He also said that he does not teach ‘voice production’ to his students, but allows them to sing with their naturally endowed voice. He certainly would not want them to just imitate him, but go beyond that, and become greater musicians than him!

Another question posed was that the singer had sung the ati-mandara sthayi on both days, but did not traverse higher than the tara madhyama; was it the singer’s choice to limit himself to this range, or wasthe  Dhrupad style itself based more on the middle and lower levels? Bhawalkar replied that it was only the scope of the individual singer’s voice that prescribed the range he chose to sing; a singer could develop a wider range by certain exercises. He could sing higher octaves in falsetto, but that would not be open throated singing.
What followed was a surprise jackpot for the audience. Dr. Padma Subrahmanyam who had come to present the next session on Siva as Nritta Moorti was so moved by Bhawalkar’s rendition of the Siva Panchakshara Stotram, that she willingly offered to do abhinaya if he would sing it again! So, there was Bhawalkar taking off on Raag Sivaranjani once again, as Padma Subrahmanyam took the pose of meditative Siva. The ten minute impromptu jugalbandi that followed was sheer bliss as the two maestros created a canvas of sound and movement!
Prev Next
Product Added to Cart
Please login to continue
Subscribe