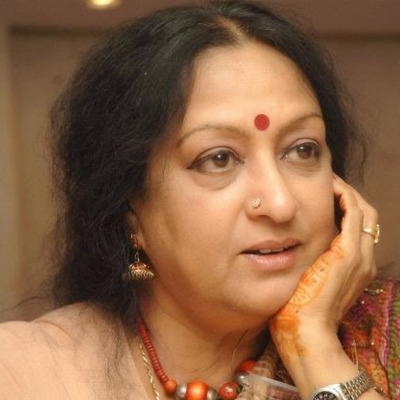 Padma Subrahmanyam in her element

The second session on the first day of the Lec-dem Mela was by Dr. Padma Subrahmanyam on Siva as the Nritta Moorti. Having begun quite unconventionally with the impromptu abhinaya for Uday Bhawalkar's Siva Panchakshara Stotram, she plunged into her presentation with her usual élan. She had just demonstrated how two artists from different parts of the country, belonging to different regional cultures, could come together on stage, and perform an item without rehearsals, the music and abhinaya blending beautifully.

Padma emphasized that the subject, Siva, was capable of unifying the entire Indian sub-continent into one cultural entity. Hindu gods are worshipped both with form and as formless. A devotee starts off worshipping his god with form, and then graduates into understanding his formless attributes. The Chidambaram temple is a classic example representing both these, the latter being known as theChidambara rahasyam.
Dance was recognised even in the Vedic period. We see ‘dawn’ being personified as the lady Ushas unveiling herself, an aesthetic way of seeing divinity in nature.
The two dominant deities Siva and Vishnu are called Sabhapati and Ranganatha – the former the Lord of the Auditorium and the latter, the Lord of the Stage.
Siva as the dancer Nataraja is the most widely known icon, the Nritta Moorti. He can be seen as the Anugraha Moorti, Samhara Moorti, Dakshinamoorti and more. In each image, the element of dance can be seen. Even in the stillness of being Dakshinamoorti, seated under the tree, imparting knowledge in silence, holding the Chinmudra, the frozen posture conveys immense meaning symbolically through abhinaya.
Bharata Muni in his Natya Sastra talks of Jambu Dweepa which includes all of Eurasia. Siva as Nritta Moorti can be seen in countries like Cambodia, Vietnam, Indonesia, albeit with regional variations. While Rajaraja Chola embarked on building the Tanjavur Brihadeeswara temple and the 108 karana panels, the Kashmiri scholar Abhinava Gupta wrote on the subject, showing the pan Indian nature of the subject.
Dr. Padma is well known for her work on interpreting and codifying the 108 karanas. There are several karanas for Siva’s tandava and Parvati’s lasya at the Tanjavur Brihadeeswara and Kumbhakonam Sarangapani temples. Sapta and Nava Tandava sculptures are seen in all major Siva temples.
As a sample, Bhujanga trasita karana was demonstrated by Mahati Kannan. Dr. Padma explained that here the foot was lifted as if to avoid stepping on a serpent. A historic interpretation could be the victory of Saivism over the Naga cult where serpents were worshipped. It could also mean the evolution of a devotee’s spiritual understanding from gross to subtle levels.
The Natya Sastra and Shilpa Sastra use the word hasta for hand gestures. In today’s parlance, the word mudra is used for the same. The word mudra actually means a seal, and also signature. Hasta is used for communication; mudra is a symbol. In a Mayavaram Siva temple, the Advaita Dakshinamoorti’s chinmudra is turned inward, depicting the inward journey.
Prev Next
Product Added to Cart
Please login to continue
Subscribe