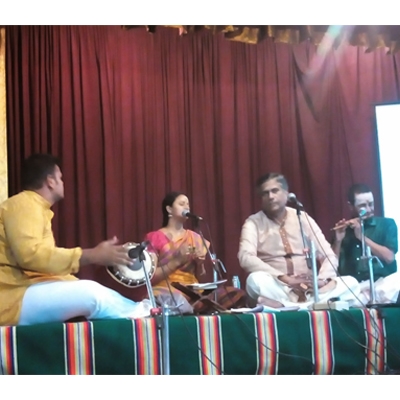 Curative powers of Compositions on Siva

The first session on the third day of the lec-dem mela was on ‘The Curative Powers of Compositions on Lord Siva’. Usha Bharadwaj of Karnatic Music Forum, introduced Dr. Sunder as one of the pioneers in propagating Carnatic music among school children through monthly workshops and lec-dem sessions organised by the forum.

A medical doctor by profession, Dr. Sunder believes in the adage “Doctors treat; the God of your faith heals you”. When a patient has faith in a doctor’s abilities to diagnose and treat his illness, his very attitude becomes conducive to healing. Such was the faith of the saints, in their utter surrender to their lord, that their words were embedded with spiritual powers that performed the magic of healing!
Sunder’s talk was cohesively strung together, laced with his customary humour, that created an easy camaraderie with the audience. Demonstration of the songs by his students (vocal by J.B. Keertana with J.B. Sruthi Sagar on the flute) was music to the ears. Mridangam accompaniment by Satyanarayanan embellished the singing. The original Panns and their corresponding prevalent raga names were announced.
Sunder aptly began by paying obeisance to Lord Vaitheeswara – the god of healing. He said that Saivite saints walked the land and spread the message of Saivism and its curative powers. In their songs, they included relevant episodes, the place where they occurred, and the characters involved. It is believed that chanting these songs could even today cure specific diseases.
The following are some of the songs and anecdotes narrated by the doctor.
A flu epidemic in Kongu Nadu was eradicated by Tirugnanasambandar’s song Avvinaikkuivvinai. The daughter of a chieftain in Tiruppaachilaachiraamam was cured of epilepsy when he sangTunivalartingal. This song is believed to be an effective remedy for neurological disorders, diabetes, and hypertension.
In Tirumarugal, the song Sadaiyaayerumaal helped a young bridegroom to recover from snakebite. It is believed that the song clears the way for marriages delayed due to sarpadosham.
In Madurai, the chieftain Goonpandian was a follower of Jainism. His sister and minister invited Gnanasambandar hoping that the saint would be able to convert the king. The jains set fire to the ashram where Gnanasambandar stayed, but he escaped miraculously. The king was afflicted with typhoid that could not be cured. The saint applied the sacred ash (vibhooti) and the king was cured. The song, Mandiramaavaduneeru that contains both the episode and the curative aspect, was sung next. The song Vinguvinai is said to be effective in healing fractures, polio and other bone related problems.
Mattittapunnaiyankaanam tells the story of how Poompavai came to life at Mylapore. While singing the Pathigams (ten verses) it is believed that with each verse, the illness wanes in stages, and the patient is cured by the time the song ends.
Manikkavachagar’s song Poosuvadumvenneere is said to have cured the stammer of a child. Appar’sOndrukolaam that brought back Navukkarasar’s child to life has the additional lakshana of each line starting with numbers, increasing one by one. Dr. Sunder pointed out that these songs were not only outpourings of bhakti, but were also rich in literary beauty.
Some of Sundarar’s songs were demonstrated movingly by Keertana and Sruthi Sagar. Dr. Sunder concluded the session with a song that described all the parts of the body, Talaiye nee vanangaai, the singing of which is believed to protect the entire body from ailment.
S. Janaki of Sruti introduced the Guest of Honour Nandini Ramani, who in her speech touched upon a few more sthalams where the deities were believed to be healers. She quoted Kalidasa “sareeram dharma sadhanam” – it is important to maintain a healthy body in order to be able to perform our duties. With the ever-present Sivam inside each of us, Siva aradhana is sure to help in healing. She praised Dr. Sunder for a well-researched and presented lec-dem that took everyone through a beautiful journey. Nandini also commended Gayathri Girish the next presenter for her multi-media series rendered over twelve months wherein she conveyed profound ideas in simple terms.
Prev Next
Product Added to Cart
Please login to continue
Subscribe