Home Reviews A Day at the Kala Ghoda Festival 2014

A Day at the Kala Ghoda Festival 2014 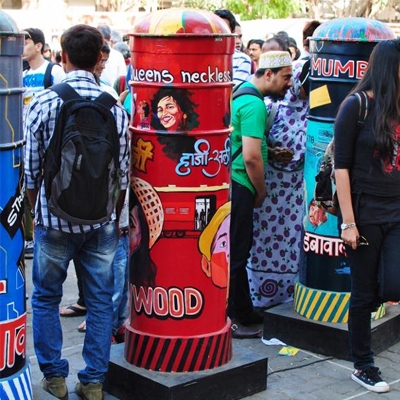 But we kept calm, and elbowed on.

The rampart is essentially a patch of street along the Kala Ghoda Precinct that is cordoned off for art installations and myriad stalls to come up. Enjoying any of these fully, however, was an exercise in patience that day, and the crowds had disturbingly close access to the installations. In the middle of the street was a huge, tall pile of used plastic bottles that from a distance seemed pointless, but on closer inspection had a hollowed center that people could walk into. A huge panel of iconic photos from The Hindustan Times collection spanned one side of the rampart, while stairs in front of it became a katta for weary souls to rest on. The plethora of artsy products and handicrafts on offer added fantastic colours to the proceedings and was fun to observe. We plodded through the entire length of the rampart to realise that many of the remarkable installations were in fact adjacent to the security set-up.

A huge popcorn box, a fake-diamond encrusted sedan, an ‘amoeba’ with porcupine-like plastic quills jutting out, and a festooned cycle with dabbas and Nutrela boxes hanging from it were interesting touches indeed. We also often veered towards the food stalls, where the biggest hits were ice cream and Bisleri.

The music and cinema sections were cut off from the rampart vicinity, and this is something one-day visitors must have wisely counted into their planning. The bus-top heritage tours were hugely popular, and in a day dedicated to unwanted confusion, we chose to forego the tour in favour of a play called Pandora’s Box. Big mistake!

The showcasing was at the ‘Artist’s Centre’, at a smallish hall with a makeshift stage. Written and directed by Omkar Bhatkar, the play is an over-70-minutes nostalgia trip of the protagonist, Amol. Pandora’s Box was painfully amateurish in every sense, and the seemingly earnest effort at showcasing gay love, and the vicissitudes of love in general, was completely lost on the tired audience. Throughout the time, we were silently praising the invention of Internet-enabled smartphones, and were left to philosophically ponder about the morality of walking out of a bad play.

But then, this was one play, and the experience of one day. By the time we hobbled out of the fest, we were forced to analyse if a fest of international ambitions shouldn’t filter its content better, and possibly introduce a minor entry charge to control the crowds. Most of the events functioned on first-come-first-serve basis, and this often meant standing in long queues and sacrificing many other simultaneous acts. A spot registration system would not have hurt. KGAF risks becoming a shopping carnival, or just a free walking plaza for college students with scant artistic interest or inclination. Nothing wrong in the former or the latter, but it makes sense to focus on one idea and to do it right. This year, it seemed all over the place, and mightily un-enjoyable.

But all said and done, one of the best experiences of being at the fest is the sight of the amazing art-deco buildings around. It really is something to be in the company of David Sassoon Library, Bombay University, Prince of Wales Museum, and Jehangir Art Gallery. A stroll around south Mumbai can truly help you recover from the disappointments of the day. And that’s exactly what we did!

Next
Product Added to Cart
Please login to continue
Subscribe