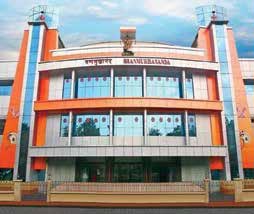 This year, 2022, is a major milestone for Sri Shanmukhananda Fine Arts and Sangeetha Sabha, Mumbai. The platinum jubilee (70 years) of the sabha and the diamond jubilee (60 years) of the auditorium was celebrated through a multimedia presentation on 22 August, 2022.

Homams were conducted in the morning to mark the auspicious beginning of the celebrations. Chairman of the Board of Trustees and President, V. Shankar traced the illustrious history of the sabha. He spoke about the arduous task of the founding fathers, T.V. Ramanujam (TVR), V. Subramanian and Prof. R.S. Mani, the glorious years of grand performances, and the hosting of huge government programmes with top leaders of the country gracing the hall. He also spoke about the travails faced when the auditorium was devastated by fire and the uphill task of rebuilding the edifice.

In the early years, concerts were organised in erected pandals. A chance speech by then Prime Minister Jawaharlal Nehru that the commercial capital of the country did not have a good auditorium to host conferences or cultural programmes on a large scale provoked TVR and the professor. They took it upon themselves to fulfil this lacuna. Their dream was big, but their pockets were empty! Apart from some corporate donations, they went from door to door for their fund collection drive and set upon the task with more enthusiasm than means!

When the auditorium was ready, it was Ariyakudi Ramanuja Iyengar, with T.N. Krishnan and Palghat Mani Iyer, who inaugurated it in a grand manner, befitting the standing of the sabha. The next day saw Chembai Vaidyanatha Bhagavatar in his element. The third-day concert by M.S. Subbulakshmi was the clincher which made the sabha membership swell to double!

The sabha has had cordial relations with politicians and government officials in holding most of its prestigious events in its premises. Prime Minister Jawaharlal Nehru, who was slated to inaugurate the hall, could not make it and deputed his sister Vijayalakshmi Pandit, then Governor of Maharashtra, to do the honours. The PM came the very next week to participate in a national conference.

The sabha and its activities have been lauded by former Prime Minister Indira Gandhi, other presidents and heads of state who have attended conventions here.

With all this going for it, an accident during a school programme in 1990 brought it all to nought. As the children were performing a candle dance, one of the wicks from a candle broke loose, landed on the AC duct and set off a blazing fire! The firefighters swung into action and put it off, but not before the whole building succumbed! It was a miracle that not a single person or child was hurt.

V. Subramanian, president of the sabha for 27 glorious years, was a veritable one-person army whose untiring efforts enabled the resurrection of the auditorium after eight years.

The hall was rechristened ‘Sri Shanmukhananda Chandrasekharendra Saraswathi Auditorium’ in 1990. V. Shankar believes that with the grace of the Sage of Kanchi, the sabha has been able to straddle great heights ever since. Every musician, dancer and drama group of renown in the country has graced the sabha stage.

The Shanmukhananda Sangeetha Vidyalaya offers courses in vocal and many instruments in both the Carnatic and Hindustani streams and Bharatanatyam. Competitions are conducted under various categories yearly, marking a milestone for every aspiring winning youngster.

Medical Services started in 1974 under the guidance of Dr. K.S. Varadachary. Today it caters to the needs of society, especially from the lower economic strata, for eye care, dialysis and general medicine.

The quarterly journal Shanmukha has been bringing out original articles from eminent scholars and other music-related discussions since its inception in 1975.

The sabha is well known for its hospitality and generosity in honouring artists. In addition, the sabha has forged a unique partnership with the armed forces. Independence Day is devoted to martyrs who have sacrificed their lives for the nation; their families are given solatium and mementoes. 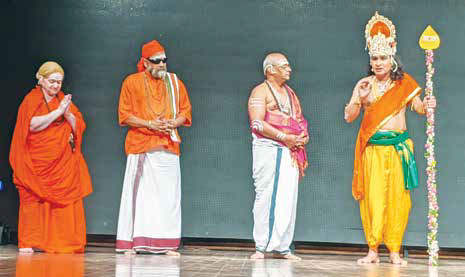 Subrahmania being the presiding deity of the sabha, as its name ‘Shanmukhananda’ indicates, the entry of Avvai Paati, Tirumuruga Kripananda Variar and Lord Muruga brought the house down! (See photos).

The aspect of dwindling audiences was also subtly brought out in a scene, old members having moved out to far-off suburbs and lack of parking near the sabha cited as primary reasons.

Raghuram, a staff member of the sabha for many decades, shared some interesting anecdotes, which were added to the presentation. Here are some:

A concert by M.S. Subbulakshmi in the presence of Swami Chinmayananda had barely begun when there was a power cut that affected the whole area. As per the Swami’s bidding, two petromax lights were placed on either side of the musicians, and MS sang to pindrop silence in the packed hall. The electricity made a comeback just as she reached the mangalam!

On the day maestro M.D. Ramanathan’s concert was scheduled, the violinist sent a telegram saying he could not come as his mother’s health condition was serious. The organisers panicked wondering who was there in Bombay that could accompany a musician of MDR’s stature and calibre? K.S. Narayanaswamy, Principal of the Sangeetha Vidyalaya recommended a 15-year-old boy who had just answered his tenth class exams. Raghu personally went and fetched him on his bicycle. The boy showed such excellent vidwat that MDR himself commended him! That lad is none other than Sriram Parasuram— a highly respected senior violinist, vocalist and musicologist today!

A drama troupe from Madras was to stage a mythological play. Actor Pandian spotted a snake charmer in front of the hall and beckoned Raghu to get the snake for him! He allayed Raghu’s fears saying that the snake’s fangs had been pulled out. Pandian as Siva came with a live snake around his neck! A few minutes into the scene, the snake, with a mind of its own, decided to slither down – you can imagine the commotion that must have been created! The snake charmer had to be called in to catch it, and Siva returned to using his rubber snake!

The entire programme was well appreciated.