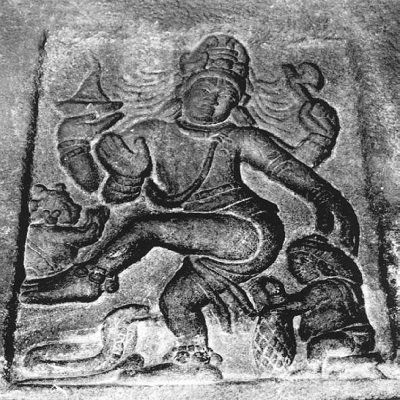 Sculptures of Nataraja of the Chola period in stone and in metal are often seen in temples and museums. In fact, the image of this deity has come to be associated mostly with the Cholas as Nataraja was their family deity. Not many are aware that such images of the preceding Pallava era are found in some of their temples. There are a few Nataraja bronzes of this period as well.

Among the best known are those adorning the walls of the famous eighth century Kailasanatha temple in Kanchipuram. Much older than these is a stone sculpture of Nataraja in a cave temple in Siyamangalam, a village approximately 80 kilometres from Chennai, in Thellar taluk, Tiruvannamalai district. Dating back to the seventh century AD and belonging to the reign of Mahendravarman I Pallava (c. 600-630 AD), this cave has an inscription which mentions the original name of this Siva temple as Avanibhajana Pallaveswaram. Incidentally, Avanibhajana was one of the titles of Mahendravarman I. Today, this cave shrine, enlarged over the centuries, is called the Sthambheswara or Tunandar temple.

The carving of Nataraja, small in size, but exquisite in finish, is found on one of the huge pillars in the Siyamangalam cave temple. Archaeologists have dated it as one of the earliest sculptures of this deity in South India. Identified by art historian C. Sivaramamurti as Siva dancing in bhujanganchita, this Nataraja has the lower right palm in ‘abhaya hasta’ and lower left hand in ‘dola hasta’ to the side of the hips. In the upper right hand is a bowl of fire and in the upper left he

holds an axe. The sculptor has depicted the whirling motion of this celestial dancer with his hair flying and garments flowing to one side. You can see a seated Sivagana, in the foreground to Nataraja’s left, playing on a vertical drum with both hands, while another gana to the right, carved in profile (slightly damaged) seems to be either holding the cymbals or pressing his palms together in anjali hasta. The attributes of Siva – the crescent moon on the matted locks and the third eye on the forehead are visible, but the dwarf or apasmara purusha underneath the right foot is not seen in this sculpture. A coiled snake with a raised hood is carved underneath the upraised left foot.

Indeed, a delectable little sculpture of the Divine Dancer carved by the dextrous fingers of an unknown sculptor of the seventh century.

(The author is a historian focussing on temple art and architecture)